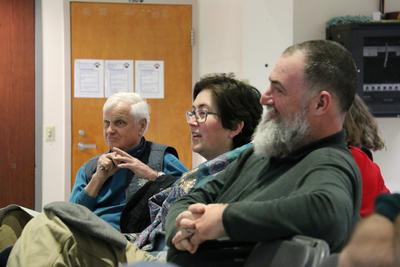 As an independent school, George Stevens Academy does not legally have to disclose its operating budget, audit, administrative and teacher salaries and decision-making processes or hold public board meetings, all required by law for public schools. The benefit is that, as an independent school, GSA has more freedom with its curriculum, policies and procedures, that is, the freedom “to be flexible and responsive,” as Head of School Tim Seeley said in a December interview.

But as trustees hold meetings with school boards and selectmen, and public forums in each of its seven sending towns, to discuss a large budget gap between what it costs GSA to educate students and what its seven sending towns—Blue Hill, Brooklin, Brooksville, Castine, Penobscot, Sedgwick and Surry—pay, which is based on the state-set tuition rate, the issue of transparency looms front and center.

“I do think it’s possible to maintain our independent [status] while sharing the information people want,” Seeley said.

But determining exactly what information and what level of transparency school board members, selectmen and citizens want from GSA is complicated, as future discussions on filling the budget gap will be, GSA Board of Trustees Chairman Samantha Politte said February 18.

For 2020-21, GSA is asking for $300 additional tuition per student but, overall, the school is seeking $2,000 above the state-set tuition rate per student.

“The hope is the $300 more will help this coming year and [we’ll] spend the next six to nine months working with our seven sending towns,” Politte told a small crowd at a February 13 public forum in Blue Hill.

With a state tuition rate of $11,759 for 2019-20, the GSA administration has compared per-student costs in area schools to show that GSA’s costs —$14,346 in 2018-19—is not out of line. However, public schools in Bucksport and Ellsworth may pay more per student than the state tuition but still charge the state rate for out-of-district students. In addition, as Blue Hill parent Sean Dooley noted, “Schools [like Ellsworth and John Bapst] are marketing for students. Bapst is doing a very good job marketing to the peninsula.”

GSA has been forthcoming with requests for financial transparency, providing its 2019-20 budget, administration costs, a 2019 audit, and information on the residential boarding program. But much of the information is not as detailed as public school board members are used to seeing. In addition, the board of trustees is reacting, rather than being proactive, in providing information, as it collects suggestions as to what transparency means for each town.

A March meeting of the GSA Board of Trustees will review the suggestions as a first step in forming a plan for transparency, Politte said.

When this reporter asked if she could attend the meeting, Politte declined—the third request declined since GSA’s November announcement of its budget shortfall and additional tuition request.

The issue of transparency continued at the Blue Hill forum.

“We could give you $2,000 or $5,000 and we still wouldn’t know what you’re doing with the money,” Blue Hill resident Marcia Henderson said.

For GSA, just meeting with school boards, selectmen and citizens shows dramatic change: “We now have a way to talk, which is pretty revolutionary,” Trustee Sally Mills noted at the Blue Hill forum.

Meanwhile, school boards are grappling with how to handle the $300 more per student requested for 2020-21 by GSA. Castine School Board member Temple Blackwood said the transparency and openness of GSA’s challenges is problematic because they have provided some information, but not at a level that Castine school board members believe is useful in making recommendations to voters.

“My own sense is that their request will ultimately require a fundamental change in their governance practices which thus far they do not seem willing to make,” Blackwood said.