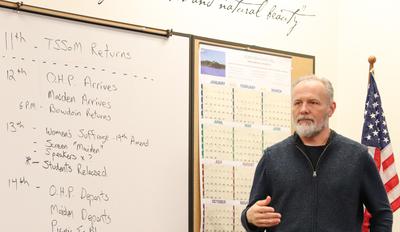 Concerts, speakers and tall ships were topics of discussion at a planning meeting for Maine’s bicentennial celebrations this summer in Castine on Tuesday, February 11, at the Emerson Hall. Castine town manager Shawn Blodgett, pictured, reviews the plans for the summer celebrations.

Residents and visitors alike have a lot to look forward to in Castine this summer, as the town begins planning the events surrounding the celebration of Maine’s 200th birthday.

While the specifics of the celebration are still in the planning stages, a rotation of speakers, exhibits, concerts and even a tall ship can be expected across several days in mid-July.

In the spirit of Maine’s maritime history, the Oliver Hazard Perry, a 200 foot, 3-masted frigate built in the 18th century will be calling in Castine from July 12 to 14, along with a smaller, ocean racing yacht, Maiden.

Town manager Shawn Blodgett noted that the Oliver Hazard Perry is only 13 feet shorter then L’Hermione, the tall ship that visited Castine in the summer of 2015 with great fanfare.

The Maiden, which competed in the 1989-1990 “Whitebread Round the World Race” with an all female crew, is stopping in Castine as part of a global voyage to raise funds and awareness for girls’ education, according to their website.

Although specific contracts with the ships have not yet been signed, tours of the vessels can be expected as part of their stay.

Blodgett also said that requests have been made to both the Bangor Symphony orchestra and the 195th Army Band for public performances throughout the village.

Speakers and special exhibits will be on view at both the Wilson Museum and the Historical Society as well.

In addition to Maine’s bicentennial, Castine will also hold events celebrating the centennial of women’s suffrage as part of the general festivities in town.

To help with the event structure, the town of Castine is seeking to hire a temporary event coordinator who will work with the Maine 200 Celebration Steering Committee to develop and manage the schedule of events. Meetings are also planned with the Castine Merchant Association and Maine Maritime Academy “so that everybody is part of the conversation,” said Blodgett.