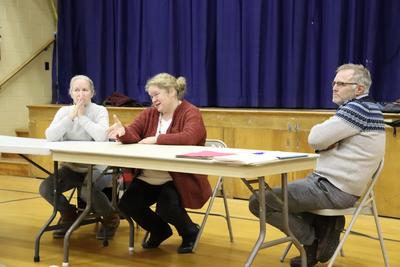 The gym at the Penobscot Community School was nearly empty on Tuesday, February 11, when members of George Stevens Academy’s board of trustees arrived hoping to field questions from the public regarding their proposed tuition increase.

Throughout the evening, only seven people attended the public forum, three of whom are currently serving terms on the Penobscot School Board, Charles Brenton, Anne Hayes-Grillo and Edward DeVito.

The lack of adequate notification and a scheduling conflict with the Penobscot Selectmen’s meeting also on Tuesday were cited by the attendees as a the primary reason for the low turnout rather than a lack of interest in the issue.

Despite the relatively few people in the room, GSA trustees Deb Ludlow and Sally Mills and Head of School Tim Seeley engaged with members of the public in a discussion lasting nearly an hour and a half, covering concerns surrounding transparency, representation and dialogue between GSA’s board of trustees and the sending towns of Blue Hill, Brooksville, Brooklin, Castine, Penobscot, Sedgwick and Surry.

“We’re all swimming in the same direction,” said Mills, referring to the ongoing dialogue between GSA and the community.

“We really want to honor what we’re hearing from you,” added Ludlow.

At the close of the meeting, everyone agreed that holding another public forum, ideally before Penobscot’s Town Meeting on March 2, was necessary to adequately address the concerns and questions from the Penobscot community.

“The more air we let out of the bag, the less it will pop,” quipped Penobscot School Board member Ed DeVito.