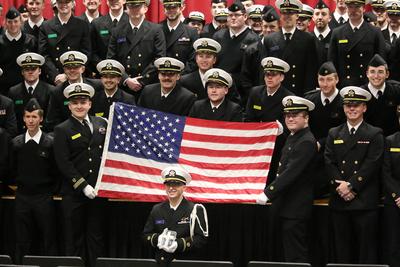 Members of Charlie Company gather with the Ground Zero flag for a photo at Maine Maritime Academy on November 18.

Maine Maritime Academy faculty, staff and students, along with members of the community, gathered on the lawn of Leavitt Hall on Monday, November 18, as an unassuming flag, rich with history, was raised and flown from the academy flag pole.

The flag is a symbol of remembrance for the tragedy of 9/11, when two planes were flown into the World Trade Center, leading to what would become many years of war. Known as the Ground Zero flag, this particular flag was created by American Eagle Flag and Flagpole and flown above Ground Zero for two months. Its journey did not stop there, as, through several series of conversations, it made its way across the ocean and around the United States. It has flown at military bases, on ships, at fire departments, and other locations over the past 18 years.

The flag was brought to Maine Maritime by alumnus Rick Leighton, who graduated from the academy in 1980 and has become one of the people responsible for “touring” with the flag. This was the first time in the flag’s history it has flown in Maine.

“It is a wonderful testament to the value of MMA to this country as a whole, that we were selected for this,” said Maine Maritime Academy president Bill Brennan. “You could see by the amount of community members present that it was something that touched them very deeply.”

Leighton explained during a brief speech while the flag flew that it is important the flag continues to travel and fly around the country and the world so that “we never forget that tragedy, and how we all came together and grew stronger together because of it.”

“We can never forget. The names of some of the rescue workers are written on this flag, so that we always remember the brave men and women who gave everything they had during that awful time,” he said.

Leighton is currently working on setting up events with two more groups in southern Maine before the flag travels to its next location. 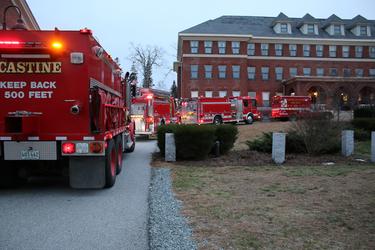 Castine Fire and Rescue Department trucks pull up on the Maine Maritime Academy campus after escorting the Ground Zero flag through town. 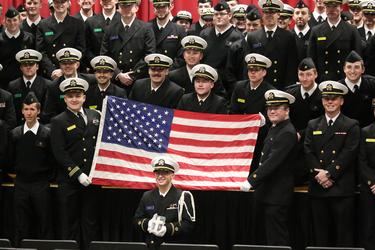 Members of Charlie Company gather with the Ground Zero flag for a photo at Maine Maritime Academy on November 18. 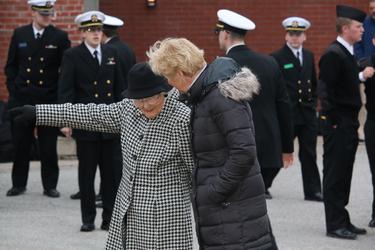 Doris Russell, left, and Janet Acker talk about having a piece of history on campus before the Ground Zero flag is flown at Maine Maritime Academy. 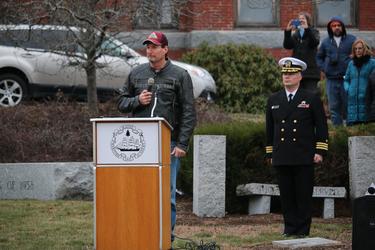