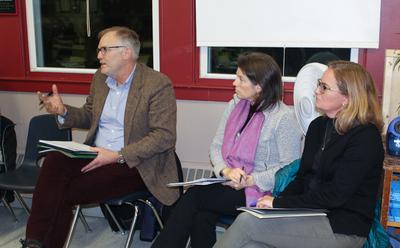 An announcement sent to parents of George Stevens Academy students November 21 alerted them to what amounts to a financial crisis for the independent high school, which is requesting a tuition hike to $14,200 per student. This year, the seven sending towns—Blue Hill, Brooklin, Brooksville, Castine, Penobscot, Sedgwick and Surry—paid the state-set tuition rate of $11,759 per student, while the actual cost per student is $14,646, according to figures presented by Head of School Tim Seeley, Board of Trustees Chairman Samantha Politte and trustee Zoe Tenney. Previously, that gap was primarily filled through tuition paid by international students enrolled in the boarding program.

“The international program is no longer generating revenues,” Seeley said. “And the bottom line is that we cannot cover the gap by ourselves.”

Seeley, Politte and Tenney presented their tuition request, accompanied by financial information, to the Sedgwick school board and members of the Brooklin school board November 19 and the Union 93 school board the next day.

While fundraising, and income from a $6.5 million endowment, generates close to $400,000 in revenue, it can’t make up the shortfall of $1 millions less coming in from the boarding program, which grew several years ago but fell from 49 students in 2017 to 31 students this year.

That won’t change, Seeley said, because of several factors. Up until last year, nearly all boarding students came from China but the changed political and trade landscape, that China is opening American-style schools, and the fact that one-third more schools are recruiting foreign students has meant only one new Chinese student enrolled this year.

About 300 students attend the academy from the seven towns, with most towns offering busing to an alternative school. Under Maine law, students living in a town with no school may choose which school to attend. The majority of students have historically chosen GSA but some towns bordering on towns with high schools might have as many or more students enrolled in Ellsworth, Bucksport or Deer Isle-Stonington.

For some school board members, seeing financial information from George Stevens Academy was long overdue. While each year the high school receives millions in taxpayer dollars from across the peninsula, as a private school it isn’t required to keep open records as public schools do.

“In 30 years of working as a principal and teacher, this is the first time I’ve seen written documentation,” former Sedgwick principal Don Buckingham said. “I hope it’s the first of many reports in the future. It’s hard to recommend [more funds] without knowing how the money is spent.”

“I can’t speak for past boards but the current board wants to be more transparent,” Politte told the Union 93 board.

A change in transparency would be a major turnaround for GSA. During the meetings, and after, Seeley said the school would provide more information once it knew what school boards and selectmen wanted to see.

“I actually don’t know what people want,” he said after the meetings. He plans on attending school board and selectmen meetings in the sending towns in December to find out.

With towns facing tuition increases anywhere from about $25,000 to $300,000, depending on their number of high school students, school board members also wanted to know if more time was available. Schools are already starting to draft budgets for 2020-21 estimating $12,200 as the state-set high school tuition rate. The tuition increase would add about $80,000 to Sedgwick’s school budget and about $300,000 to Blue Hill’s.

“The boards are going to have to decide,” said Brooklin and Sedgwick Superintendent Christian Elkington. “I think [GSA is] going to have to really look at a three or four year plan to get where they want to…I can’t see us being able to get there in one year.”

For GSA, spreading the increase over a period of two or three years is feasible, Seeley said, but could also be difficult if every town decides on a different plan. A “nightmare” scenario would be if some towns opted to no longer offer GSA as a school choice while others do. In stark terms, a continuing budget shortfall means programs and staff are cut although special education, under a different funding model, would not be affected.

“Without more money, we go away,” Seeley said. “There’s no scenario where we get the same tuition [as now]. The only promise I’m making to towns [if the school is unable to obtain additional funding] is we’ll be a much diminished school and not able to serve all students. We have to get to the end of this to know.”

Editor’s note: This story was changed November 22 to correct the number of Chinese students enrolled at GSA.