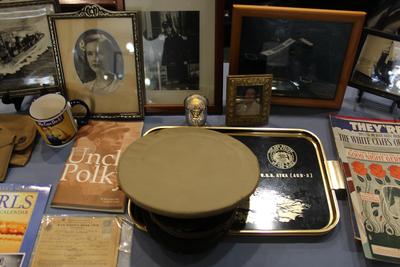 A memorabilia table showed World War II mementos, including photos of the performers’ parents, who served the war either abroad or at home.

At what price freedom? The songs and stories of Curt Bessette and Jenn Kurtz drew a poignant picture of the men and women behind World War II abroad and the war effort at home Veterans Day, November 11, to Witherle Memorial Library.

Featuring popular songs from the 1940s, such as “Sentimental Journey,” and “Till We Meet Again,” the duo also sang the third most popular song among Vietnam veterans, John Denver’s “Leaving on a Jet Plane,” (The top song was reportedly The Animals’ “We Gotta Get Out of This Place.”)

The couple, who live in southern Maine, also performed original songs about individual soldiers and composites that were not as light and fluffy as those wartime songs, like the song about Navy cadets trapped in the USS Arizona Memorial, bombed during the Pearl Harbor attack with men still alive in its belly. Rescuers could hear them banging on the pipes below for days after although they were never able to reach them.

Bessette and Kurtz, both children of fathers who served in WWII, developed the program to keep all veterans’ memories alive and “to acknowledge the men and women who served at home and overseas,” Kurtz said.

She also picked up the kazoo for “Boogie Woogie Bugle Boy,” which brought a smile to the dozen or so people who ventured out on an icy night to honor American veterans from World War II and all wars.

“I want to keep those guys alive, just for an hour,” Bessette said, before their final song:

I saw a hero, I saw a war
I have some friends who can’t march anymore.
I feel guilty, I feel shame
I came home/And all my friends remain.

The program was co-sponsored by the library, the Friends of the Library and the Castine Arts Association.