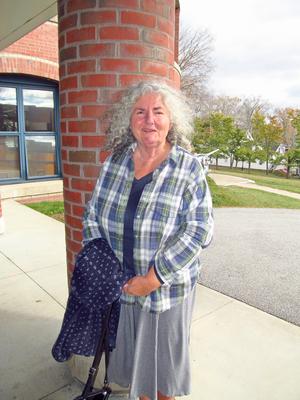 Alice Kimball created a Facebook fundraiser for the Castine Fire and Rescue Department in honor of her 75th birthday.

When Alice Kimball decided to start a Facebook fundraiser for the Castine Fire and Rescue Department in honor of her 75th birthday, she had no idea it would result in more than half of the department standing in her front yard on a dark, cold November evening singing the tune “Happy Birthday.”

“I was in shock as the trucks and fellows gathered on the dark night in my yard. It took me a few minutes to even realize that something was up that involved me. I thought that they were just [Maine Maritime Academy students] just lost and looking for the path into the woods which I live next to,” said Kimball.

Kimball created the fundraiser on October 31, with the goal of raising $750 by November 14, the official day of her birthday. When she made the decision to raise the money for the fire department, she said it was an easy one to make.

“For my birthday, I wanted to ‘share’ with the Castine group that I personally consider to be the most important of all possible groups,” said Kimball of the fire department. “They are willing to risk their lives 24/7 for us and they are all volunteers.”

Jack Spratt, Tom Gutow and Kyle Fallon all helped organize the singing event last week, and arranged for some of the fire trucks to accompany the singers. Also taking part in the impromptu choir was Castine Fire Chief Randy Stearns.

Since the fundraiser began, it has surpassed the $750. As of November 11 it had reached $785, with three more days to go. The link can be found on Kimball’s personal Facebook page, as well as the You Know You Are From Castine, Maine, If… page, which Kimball runs. Checks can also be made out to the Castine Fire and Rescue Department and sent to 577 Castine Road.

“I love CFRD and last Tuesday, I felt the love returned with their beautiful words and harmonious singing with amazing big smiles on their faces because they realized how happy they had made me this birthday month,” said Kimball.