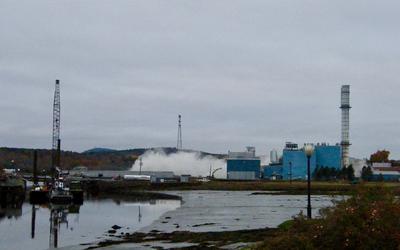 In a matter of seconds, the concrete and metal stack disappeared in a modest cloud of dust, October 29, at the former paper mill site in Bucksport.

First reports from the police department told would-be onlookers that demolition of the tall pollution control stack at the site of the former paper mill would take place on October 29, between 6 and 10 a.m. So folks began to gather on the waterfront, along Main Street, and across the river at Fort Knox before daybreak on Tuesday.

Town officials acknowledged the significance of a major step in erasing the structures of the former paper mill, which ceased operation in 2014 after more than 80 years in business. They recommended that the public watch from the safe distance of Fort Knox in Prospect. The state historic site was open free of charge at 6 a.m. with restrooms and plenty of parking.

Police closed part of Main Street and waterfront areas close to the demolition site as word circulated among early arriving spectators that the actual knockdown would be closer to 8 a.m. A group of local men waiting in the town’s gazebo said they expected warning sounds at two and one minutes before the explosion of the approximately 350-foot concrete and metal stack. But a few minutes before 8 a.m., with minimal noise, the stack leaned, split in two and disappeared in a cloud of dust.

Parts of the site are currently being developed, including the creation of a Center for Professional Mariner Development by Maine Maritime Academy, along with a mussel farm and a salmon farm.

Editor’s note: This story was changed to correctly identify the businesses being developed at the former mill site.