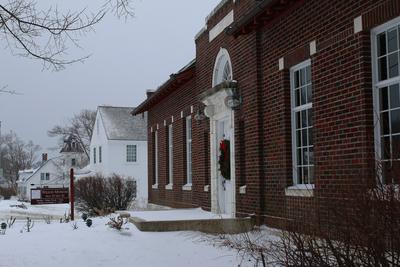 The Wilson Museum and Perkin House, on Court Street in Castine.

Present in most every aspect of the Wilson Museum over the past 44 years, Patricia Hutchins plans a graceful exit as executive director in September 2021, allowing two years for the transition in leadership.

Over that time, Hutchins plans to “gradually transition some of her responsibilities to other staff members and to focus on key projects, including a Perkins House cookbook, an updated history of the Wilson Museum, and plans for the museum’s 100th anniversary,” states a recent press release announcing the change.

Hutchins first connected with the museum as a volunteer in 1975, helping to prepare the John and Phebe Perkins House for the country’s bicentennial summer, was hired to create period costumes for the Perkins House guides and the blacksmith and was named full-time curator in 1985 and executive director in 2004.

Currently, Barbara Jackson, as chairman, and David Wyman and Temple Blackwood have formed a transition team and “commenced its task of preparing the Wilson Museum for the significant challenge posed by the retirement of Patty Hutchins,” according to a November 22 team update.

“The leadership transition we are faced with presents us with the opportunity to consider options for our future, both in the context of public needs we would like to meet, use and development of resources, and perspectives on the future of Museums like ours, in general. Therefore, a framework that we are using to guide the process is to find someone who will both embrace who we are and shape our future.”

Towards that goal, a short-form survey was sent to museum members and other community stakeholders, to help identify the museum’s current strengths and make recommendations for change and growth over the next five to10 years. At the same time, a long-form survey was given to staff and trustees and a long-form one to staff and trustees asking them to identify “the relative importance of all aspects of our activities, staffing, resource allocation and external relationships.”

The team will next analyze the survey responses, which are due by December 10, and present a time line for the transition to the board of trustees that same day. A job description will be finalized, working with Hutchins, by April 2020, with the job opening posted in August 2020.