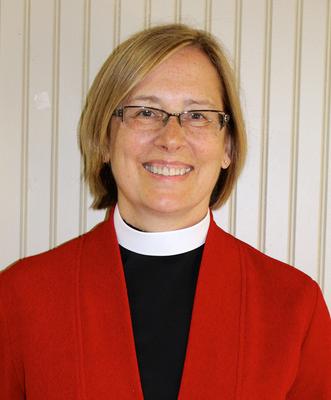 Rev. Donna Downs took over as Priest in Charge at Trinity Episcopal Church in Castine on October 1.

Life has taken Trinity Episcopal Church priest Donna Downs around the world, from Connecticut to Tokyo, Japan, England and more, but one small town on the coast of Maine always remained a constant.

“I first came to Deer Isle in 1979. [My husband] Allen’s family as been coming since the 1930s. No matter where we moved we would always come back for visits. We love the community,” said Downs.

After her husband retired in November 2018, the couple moved to Deer Isle from Cambridge, England this past January. Not ready to retire herself, Downs applied for the position of Priest in Charge at the Trinity Episcopal Church.

“They reminded me of my former parish whom I loved and the Spirit brought us together,” she said.

Downs grew up in Connecticut, with her parents, twin sister and two brothers. The family practiced in the Roman Catholic faith, but after she got married, Downs began to practice in the Episcopal church she and her husband had gotten married in. While participating in missionary work through that church, Downs said she began to feel a calling to the seminary,

“I had a lot of questions about religion and the history of the church and wanted to be a professional lay person in Christian Education to help others who had struggled with religion as I had,” she said.

Because she grew up Roman Catholic, which does not allow women to become ordained as priests, Downs did not enter seminary with that intention, but members and clergy of her church encouraged her to make that leap. Because her husband’s work required them to move so frequently, Downs was not able to become ordained until January of 2004.

Now 15 years into her career in the ministry, Downs said she loves the vocation she has been called to.

“I especially enjoy parish ministry. It is never boring,” she said. “There is always something new and different going on, from births to spending time with grieving families. The people and relationships are a gift.”

Downs began her work at the church in Castine on October 1, and she said that the parishioners welcomed her immediately.

“The community has been supportive and encouraging. One of my priorities is to discover what people hold dear about their church and where they see God calling us. It will be a sacred adventure,” she said.