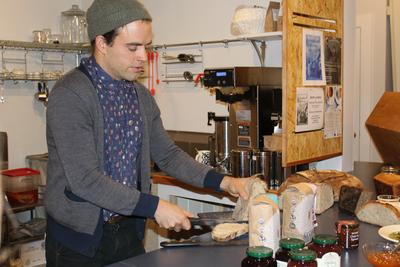 Man does not live by bread alone—and neither do women. But they both probably could, if the bread is artisanal and made from live enzymes nudged from the atmosphere into a bowl of sourdough starter on the kitchen counter.

Such was the message (sort of) at Compass Rose Book Store from Tim Semler, of Tinder Hearth Bakery in Brooksville, and Daniel Leader, a part-time resident of Castine who basically started the artisanal bread movement in the U.S. by opening Bread Alone in the Catskills region of New York 35 years ago.

“I was very much inspired by Dan,” said Semler, who was born the same year Leader opened Bread Alone, making 1983 “a very good year for bread,” said Leader.

Both men share a passion for a craft that they learned informally, from French and European bakers—and from grain millers.

“I say I’m a graduate of the back door school of baking,” Leader said. “I learn to bake by listening to people.” He added, “I went to Tim’s back door this morning.”

Great bread comes from great grains, both agreed. “From day one, we always bought organic flour. We were committed,” Leader said, explaining that while industrial mills measure flour by the truckload, and bleach, bromate and then re-add the nutrients destroyed in the process, small mills, like Maine Grains, run out of the old Skowhegan jail, used by Tinder Hearth, are committed to maintaining the integrity of the grain.

“The connection between bakers and millers and farmers—it’s an important conversation that hasn’t happened in a long time [and] it’s happening all over the country,” Leader said.

Questions from the standing-room-only audience centered on process, starting with whether Leader and Semler measure their ingredients.

“When I first learned to bake bread, there was no measuring, just bowls of flour and water, and the salt was the big adrenaline rush,” Semler said. “Those days are long gone.”

Bakers use metric measurements, and that was an issue for some potential home bakers thumbing through Living Bread.

“If you take away cups and pounds and just think in terms of metric, everything becomes so much easier,” Leader said. Not everyone present appeared swayed, so he tried again: “It is the language of baking and ultimately makes better bread.”

Some were convinced, or willing to test the metric waters, judging by the line for Leader to sign copies of Living Bread, his fifth book on bread and bread baking. Meanwhile, in the book store’s café, Semler sliced loaves of dark rye, sour dough and other varieties for tasting with flavored olive oil, jams and spreads.

“At Tinder Hearth, we really only have one recipe,” Semler said, then thought for a second before concluding, “I don’t really believe in recipes.”