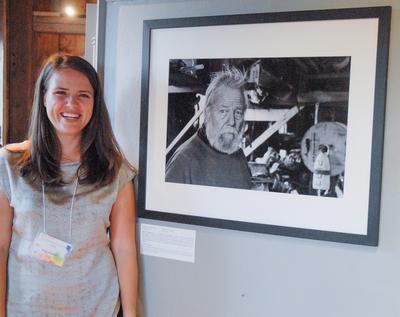 The Wilson Museum has acquired a photograph by Castine artist Helen Modesett for its permanent collection. The work, depicting local boatyard owner Kenny Eaton, was the People’s Choice at Collecting Castine.

More than 100 people gathered at the Wilson Museum campus on August 5, to participate in Collecting Castine, the museum’s annual fundraiser—with a twist—and celebration of Castine artists. Attendees nibbled hors d’oeuvres, mingled with friends, and viewed an exhibit of original artwork created by living artists either from Castine or with an association to Castine, according to a news release.

Collecting Castine, now in its fourth year, has honored an artist or artists each year for their work and legacy. This year the entire community of Castine-connected artists were celebrated.

Each year Collecting Castine attendees cast their votes for the People’s Choice work of art to be acquired by the Museum—the “twist” in this fundraising event—and added to the Museum’s permanent collection.

When she accepted the award, Modesett told a story about the portrait, noting that Eaton was kind and generous and that she had “just one click” to get it right. She added, “I have spent the last year and a half working on a photo book of Castine. This is one of my favorite photos from the series. Kenny stopped for one photo between pulling boats out of the water this past fall.”

Following the People’s Choice award, all other artwork was available for purchase via silent auction, and 10 pieces were sold to buyers. Proceeds from the event go to support the Wilson Museum’s collections and programs.