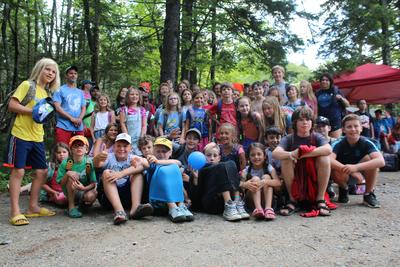 Nichols Day Camps drew nearly 300 children from near and far to its programs this summer, with local organizations making sure more peninsula kids have the opportunity to attend.

Summer camp is considered a rite of passage by many parents and children, and a necessity by many working parents. But not all parents are able to send their children to camp. Enter the Starfish Program, a partnership between Nichols Day Camps and peninsula nonprofit Community Compass, in collaboration with The Hatch Community Youth Fund in Castine.

The Starfish Program has provided the opportunity for 37 local children to experience archery, soccer, swimming, kayaking and other water sports, theater, arts and crafts and the friendships that form between children, from all walks of life and geographic locations, at sumer camp.

The Starfish Program began with Gil Tenney of Castine, a former Community Compass and current Hatch Fund board member, “to send kids to summer camp who might not have the opportunity to go,” said Community Compass’ Executive Director Scott Hamann. Seated at a picnic table at the Sedgwick camp, with shouts and laughter floating by from a group of soccer-playing campers, he and camp director River Plouffe-Vogel talked about the program and its benefits.

While Nichols Day Camps has long offered “camperships,” to cover full or partial camp tuition and transportation, the Starfish Program has more than doubled the number of scholarships. What is unique is the mentorship embedded in the program that helps identify children in each of the nine towns Community Compass serves—Blue Hill, Brooklin, Brooksville, Castine, Deer Isle, Penobscot, Sedgwick, Stonington and Surry—and help them apply and make sure the children are “camp ready,” with swim suit, food for packed lunches and the like.

“The mentorship is at the core of the program,” Hamann said.”We really want wraparound services.”

The Blue Hill Society for Aid to Children, the nonprofit organization that operates Nichols Day Camps, gave 20 full and 10 partial camperships this summer at a cost of approximately $10,475, plus transportation costs. Community Compass funded 17 more campers, and worked with Andrea Hatch of The Hatch Community Youth Fund to provide an additional 22 camperships, some through Community Compass and some through direct application to The Hatch Fund, at a total cost of about $15,500. Campers come from each of the nine peninsula towns, with the Hatch Fund specifically aimed at families in Castine, Brooksville and Penobscot but also funding camperships in Sedgwick and for children living at H.O.M.E. in Orland.

“The great thing that happened this year is that Community Compass, through its mentorship program, identified nine or 10 kids in Penobscot and Brooksville who would probably not have been able to go to camp without the funding,” Hatch said. “We were able to supplement the Starfish funding so that we could support all these kids, which was really great.”

More than double the number of Community Compass and The Hatch Fund camperships were available this summer compared to 2018.

“This was the first year we were really able to work off established relationships and grow the program,” Hamann said, which found funding through “some of our major donors who wanted to see this succeed.” In addition, a number of local organizations gave an additional 10 camperships, he noted.

The total enrollment at Nichols Day Camps this summer was 291, with campers from as nearby as down the street to as far as Sweden and Germany. The cost of a two-week session is $418 for in-state and $625 for out-of-state campers, with $155,000 of revenue coming in from tuition and $120,000 from investments filling the organization’s $277,400 operating budget for 2019, according to general manager Marti Brill.

“It’s unique,” Plouffe-Vogel said, noting that from 30 to 40 percent of campers come from out of state each summer. “Camp is the first place a lot of these kids are getting to meet kids from other towns, and from across incomes. We kind of get to [be] a bridge between the two communities. It’s a really unique setting that allows it to happen.” 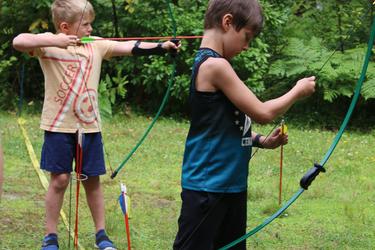 Archery is a new sport, and skill, for many Nichols Day Camp campers. 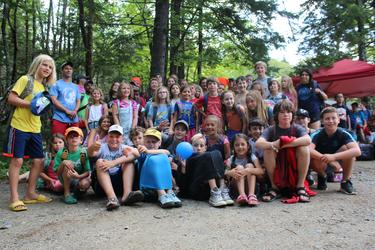 Nichols Day Camps drew nearly 300 children from near and far to its programs this summer, with local organizations making sure more peninsula kids have the opportunity to attend. 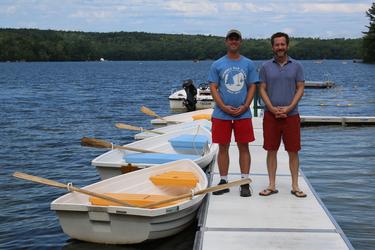 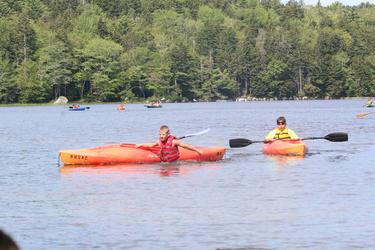 Kayaking on Walker Pond is a favorite activity at Nichols Day Camps.