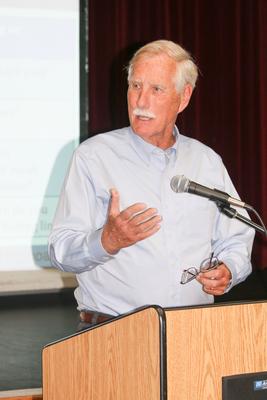 Commercial lobster fishing and the endangered North Atlantic right whale took center stage August 13 as NOAA—the National Oceanic and Atmospheric Administration—held a public scoping meeting at Ellsworth High School Performing Arts Center. The goal of this, and three other meetings being held up and down the Maine Coast, was to hear from lobstermen and other industry stakeholders before preparing a draft environmental impact statement on proposed gear and other modifications aimed at a 50 percent reduction in vertical trap lines to lower the risk of North Atlantic right whale entanglements and death.

But Maine lobstermen are protesting that right whales aren’t being killed in Maine waters after previous gear modifications were put in place and feeding grounds have moved northward as ocean waters warm.

“My problem with the presentation is the lack of data,” U.S. Senator Angus King said to loud, prolonged applause.

Some data is clear. In 2017, there were 17 confirmed right whale deaths, 12 in Canada and five in the U.S. Under the federal Marine Mammal Protection Act, right whale deaths must be lowered to 0.8 per year to ensure its continued existence as a species.

“We are required to take measures to reduce the [fatalities],” NOAA scientist Colleen Coogan said.

While Maine lobstermen willingly adopted earlier gear changes, many asked why the burden is again being placed on them, when data is inconclusive as to where right whales are dying.

“We have complied with everything you’ve asked of us but this ask is way too big,” Deer Isle lobsterman Julie Eaton said.

Evidence of where whale deaths are occurring points largely to Canada, which must demonstrate by 2021 that its whale protection rules are comparable to those in the U.S. or suffer trade restrictions. Whale fatalities also show evidence that the deaths are caused by ship strikes more than entanglements.

Virginia Olsen from Deer Isle presented NOAA officials with a sheaf of signed declarations from local lobstermen that they’ve never sighted a right whale in the waters they fish.

But Brooksville scientist and Castine science teacher—and a sternman in his past—William McWeeny, who advocates with his students for right whale education and protection, disagreed.

“I never saw a right whale until I started looking for one,” he said. “When you’re fishing, you’re not looking for whales. They’re out there, it’s been documented.”

NOAA uses planes that fly over areas where right whales aggregate, such as the Gulf of St. Lawrence, Cape Cod Bay and, more recently, off of Nantucket, but not in Maine because the whales don’t gather there but travel through in ones or twos, leaving uncertainty as to how many right whales, and whale deaths, can be attributed to Maine fishermen.

“More uncertainty,” a lobsterman called from the audience.

Of the 1,400 right whale entanglements from 1997 to 2004, only 13 carried gear that could be traced to its origin, and everyone agreed that gear identification needed to be implemented.

Stonington lobsterman John Williams, a member of the TRT team, spoke in practical terms. “Put a cap on offshore end lines and go from there,” he said. “If that’s where the problem is, let’s go there.”

What was certain, some lobstermen said, was the safety impact to lobstermen of proposed gear changes, such as more traps on a trawl line, to reduce the vertical lines.

“Off shore boats are not set up for 44 traps on a line, people are going to die,” Brooklin lobsterman and Zone C Council member David Tarr said. “You ask what the cost is? I ask, what is an acceptable loss of life”

The threat to fishing communities was also raised by lobstermen and Stoningtown Town manager Kathleen Billings:

“Over half our population workforce is directly or indirectly in the [commercial lobster] industry,” she said. “We are not going to be able to survive this.” 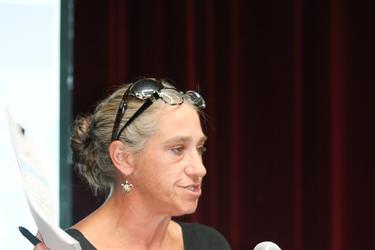 Maine Lobstering Union #207 board member and Stonington lobsterman Virginia Olsen presents NOAA scientists with signed declarations from lobstermen that they have never sighted a right whale in the Gulf of Maine. 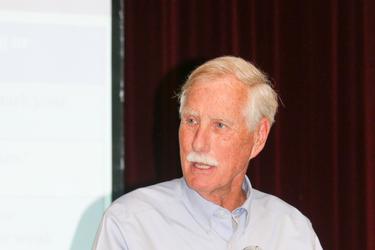 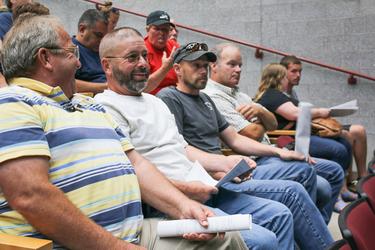 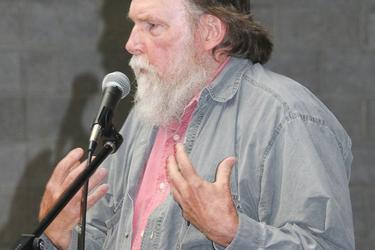 Scientist, teacher and right whale advocate, William McWeeny, of Brooksville, said right whales are in the Gulf of Maine if you look.