Castine
Originally published in Castine Patriot, May 3, 2018
MMA training ship to depart May 10 for European ports 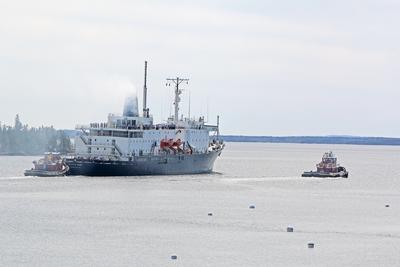 Maine Maritime Academy T/S State of Maine will set a course for European ports of call on Thursday, May 10, at approximately 1 p.m. The 70-day cruise will combine learning and adventure as students fill their at-sea requirements towards international certification with stops in Spain, Netherlands, Italy and Portugal. Under Captain Leslie Eadie III, students will board on May 6 to prepare for departure and return to Castine July 14.

Maine Maritime Academy students, officers, and crew will depart Castine on Thursday, May 10, at approximately 1 p.m. on the Training Ship State of Maine for the annual training evolution to foreign and domestic ports of call. This year’s itinerary includes stops in Cadiz, Spain; Rotterdam, Netherlands; Lisbon, Portugal; Civitavecchia, Italy; and Alicante, Spain. Schedule and ports are subject to change.

Under the direction of Captain Leslie B. Eadie III, master of the State of Maine, the educational cruise will commence in port on Sunday, May 6, for pre-sailing preparation. Captain Eadie, of Brewer, a 1976 graduate of the Academy, assumed command of the vessel in 2011.

Well-wishers are welcomed and encouraged to view the vessel departure and return from the Maine Maritime Academy waterfront or via webstream at mainemaritime.edu/streaming. Friends, family, and fans are invited to follow the ship’s journey through the cruise blog at cruise.mainemaritime.edu.

The ship will host the traditional family day sail on the return leg from Searsport to Castine on Saturday, July 14. For this section of the trip, Second-Class students (Juniors) may invite their parents aboard. The day sail allows parents the unique opportunity to see the high level of technical proficiency and leadership achieved by the students. Training cruise activities will continue in port through Monday, July 16.

According to sea time and instruction required by STCW (Standards for Training, Certification and Watchkeeping), total cruise length is 70 days. Students pursuing an officer’s license from the U.S. Coast Guard as a third mate or third assistant engineer are now required to train at sea for at least 300 days during their first three years at the Academy. Freshmen and juniors sail aboard the State of Maine while sophomores are assigned to merchant ships worldwide.

Complementing the educational focus of MMA’s training cruise, students and staff sailing aboard the State of Maine will work for the 11th consecutive year with the Belfast-based organization, Educational Passages, which utilizes 5-foot unmanned sailboats to enable the study of ocean wind and current patterns by school and community groups. Boats are crafted to sail indefinitely downwind and will transmit their location and boat speed via a GPS interface for up to one year. The boats rely solely on wind and current power. Initial sea trials were launched from MMA’s schooner Bowdoin in 2008 off the northeast coast of North America.

Coordinated by program director Cassie Stymiest, this year’s boat launch from the TSSOM will provide an exciting learning opportunity for students at Scarborough schools. Their boat, Red Storm, was first launched in 2015 off Georges Bank and sailed to Ireland in six months. Its second voyage was short as it sailed from and back to Ireland again. Its third voyage was originally scheduled for 2017, but has been rescheduled to this year. To learn more, visit Educational Passages online or contact Cassie Stymiest at cassie@educationalpassages.com or 619-1259.