Castine & Penobscot
Originally published in Castine Patriot, December 20, 2018
A lathe, some tools and a piece of wood
Woodturners inspire by example and design 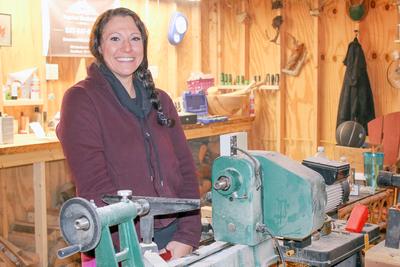 Christina Snow prepares for a morning’s work at her Penobscot shop.

Woodturning—the art of using a lathe and hand tools to create objects useful and beautiful—can create a piece for display or for the kitchen table, or 130 balusters for a house renovation, as Castine woodturner Temple Blackwood recently did.

“In Colonial times, every village had a wheelwright, blacksmith and a woodturner,” he said.

As owner of Highlands Woodturning, Blackwood is both teacher and craftsman and maker of spindles, stools and bowls. He shares his expertise and passion with students near and far.

But when he started in 1969, he had “very little clue of what I was doing,” and learned mostly from books. “I didn’t know anyone else who was doing it,” he said. “In many aspects, it’s a solitary [occupation].”

Blackwood also does a fair amount of restoration work, creating spindles, columns and balusters to order, including a one-time order of 1,100 four-foot balusters.

With nearly five decades of experience, overlapping his career as an educator, Blackwood still “happily” works seven days a week in his shop, anywhere from seven to 12 or 13 hours.

“I grab a piece of wood and I wonder what I’m going to make out of this,” he said, in his large studio filled with machinery and tools, and his dog Woody sleeping on the front door mat. “Every piece of wood is different and has its own characteristics.” He is inspired by Shaker designs, he said, and by the natural designs in each piece of wood.

About 70 to 80 students come through his shop each year, he said, and he also sells shop time, where his role is to help and facilitate.

“Last spring, the whole paid crew of the Bowdoin was here for shop time one night a week,” he said.

There are students who keep returning, like the 70-year-old man who comes from outside of Lewiston every couple of months, and those like Christina Snow, who arrived three years ago with her kids and became so enamored with the process that her husband built her a shop in their Penobscot garage.

That garage is now the home of Bagaduce Woodturning, where Snow turns simple kitchen tools such as an ice cream scoop, pepper grinder, bottle opener, oyster shucker and even a squirrel call into works of art.

“I took a lesson and was instantly hooked,” she said. “I quickly found out it was a very expensive habit. I started selling my [pieces] to support my woodturning habit.”

Snow, who is a full-time bookkeeper for Snow’s Garage and a parent, said she puts in up to 60 hours a week in her shop. She sells her items at local craft fairs, where she said the reception to her work has been “incredible,” and through her Facebook page, which often leads to special orders. Sometimes, when she’s stuck, she goes to see Blackwood.

“Temple gives me great ideas,” she said. “He’s been incredible.”

Her favorite wood to work with is apple. His is black walnut. But neither the experienced or relatively new woodturner would admit to having one favorite piece to make.

“Anything,” Snow said. “Just turning. Having the wood chips fly.” She paused, then added, “Probably the pepper grinders.” 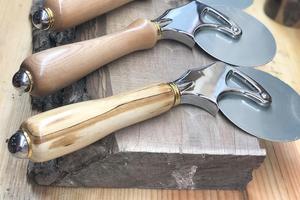 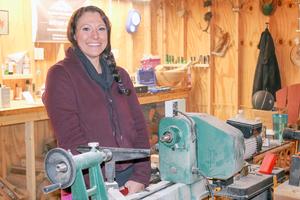 Christina Snow prepares for a morning’s work at her Penobscot shop. 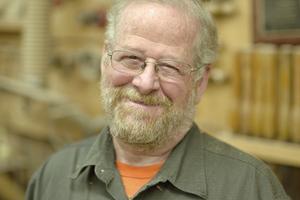 Temple Blackwood displays a piece of work he then engraved for a local flavor. 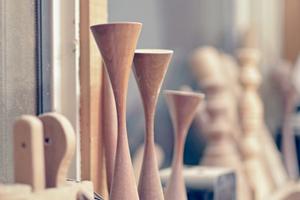 Works in progress at Highlands Woodturning.