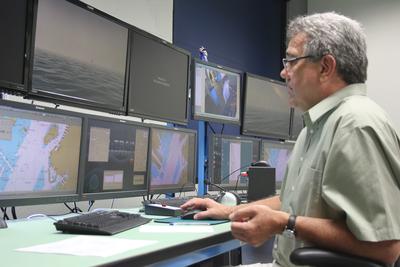 Jim Saunders, a Maine Maritime Academy technician in charge of the simulator room, advised the trainee crew from ground control.

Students of a different ilk than the usual Maine Maritime Academy young mariners took over the bridge over three days in June. The bridge simulator, that is, a high-tech systems tool designed to train future merchant marines, Coast Guard officers and other navigators of high and low seas.

“[It] exposes students to an artificial yet realistic setting where, prepped with just a few basic operating principles, they can be challenged with increasingly complex scenarios,” MMA Provost and Vice President for Academic Affairs David Gardner said.

The goal was to accelerate their teamwork, leadership skills and self awareness, said organization development officer Isla Baldwin. “In the course of what would usually take months, we need them to be in a matter of days,” she said.

Rotating through watch positions of helmsman, navigator and officer-in-charge, with the fourth team member noting the others performance on the bridge, the trainees handled “increasingly complex” situations that serve as a metaphor for industry, said Kim Parrott, executive coach and facilitator at SeaChange Resources, the Blue Hill company that developed the program.

“They come in with no experience. It’s a brand new situation, with ambiguity, taking in information and acting quickly,” Parrott said. “It’s totally different from anything they’ve done.”

On their final day of training on June 30, the task was navigating their vessel from the New York City port, through a channel shrouded in fog southward into the Atlantic Ocean.

The communication radio crackles as technician Jim Saunders, who runs the simulator room, breaks in with directions from land.

Tarsetti sounds the fog horn. “Boy, that’s fun,” he says, then turns to his crew. “It looks like we’ll be chasing that ship.” The vessel moves toward the channel on the bank of screens, flanked on one side by the Statute of Liberty and by the city coastline on the other.

“How fast are you going?” the navigator asks.

“All the way,” Tarsetti responds.

And helmsman Amber Allen reacts with steady hands on the wheel.

The idea for using the simulator for training outside of that for professional mariners came from conversations between Parrott and her husband, who teaches marine transportation at MMA.

“I do business simulations a lot,” said Parrott. “But [thought], what would happen if I used the bridge as a simulator platform?”

“It’s been amazing,” Baldwin said. “Leaps and bounds in just a few days.”

GALLERY — Preparing for industry in a new way 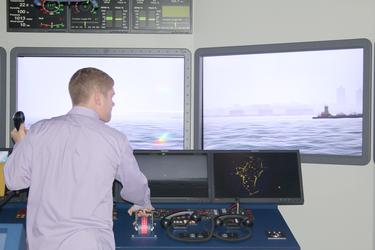 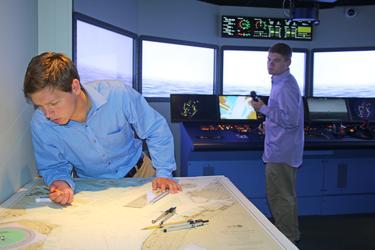 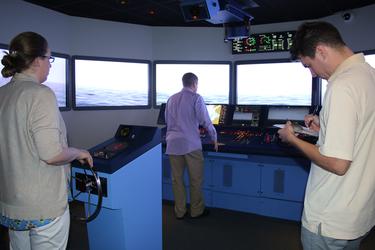 Amber Allen takes the helm, with Matthew Tarsetti, left, as officer-in-charge and Dan Zmistowksi as observer. 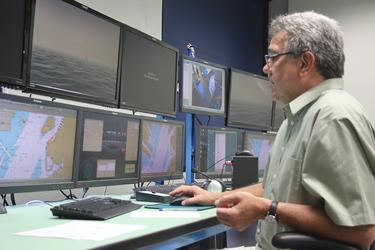 Jim Saunders, a Maine Maritime Academy technician in charge of the simulator room, advised the trainee crew from ground control.